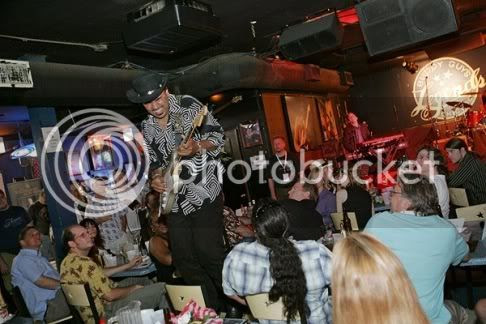 
It’s mega music madness this weekend with the Blues Fest in Grant Park, Juicy Wine Co. pairing wine with rap, and an original member of Devo showcasing his artistic skills.

Get in where you fit in:

Leave it to Juicy Wine Co. to jump out the box when it comes to vino. This time they’re hosting Betts & Scholl, a little-known label created in 2001 that’ll be pouring The Chronique, a new school wine with concentrated raspberry and strawberry flavors. You’ll be able to sample their vino as a deejay spins vibes from Dr. Dre’s legendary The Chronic. And as a bonus, guests will get a $5 Juicy gift card toward any Betts & Scholl wine purchase. 6-8pm. $15.

Upscale men’s boutique HALO [FOR MEN] throws a scotch tasting for those guys looking to really start the weekend off right. Guests will have the opportunity to sample 15-, 17-, and 21-year-old aged scotch with appetizers. Entertainment includes a caricaturist and DJ ME spinning. 6:30-8:30pm. RSVP to rsvp@halochicago.com.

It’s the first Thursday of the month, so that means Braziliance returns to Sonotheque. Resident spin star Joe Bryl hosts this sexy set paying homage to beautiful Brazil with The Braziliance Drinking Guide, a special menu of liquid creations capturing the art of cocktailing in Rio like mojitos, Caipirinhas and exotic beers. Guests are encouraged to start the night off at Flo for a special Brazilian menu, then come to Sonotheque for comp admission. 9pm-2am. Free before 10pm; $5 after.

Butter Boogie kicks off tonight at Crimson Lounge. Cool kids Good for Party will be throwing this one every first Thursday of the month with comp Absolut vodka tastings and CDs until 10pm. Deejays Mike Cole and Mark Grusane spin modern soul, boogie, disco, electro, vintage house and more. 8pm-2am. Free when you RSVP.

Mark Mothersbaugh was an artist long before he formed iconic punk-alt group Devo with Jerry Casale and Bob Lewis. And though the group will forever be known for its timeless “Whip It,” he’s been busy writing music for likes of filmmaker Wes Anderson (“Royal Tenenbaums,” “Rushmore”), the children’s show “Clifford the Big Red Dog” and Apple Computers. He’s in the spotlight in Chicago this weekend for his one-man show, The Postcard Diaries, which showcases the illustrated postcards he’s created for more than 30 years. The grand-opening reception takes place at DLG River North, located in the same building as hot new “bistronomic” eatery graham elliot. 6-11pm. Free.

And speaking of visual art, one of MutualArt.com’s Top 20 Must-See Museum Exhibitions for Summer 2008 is the new Everything's Here: Jeff Koons and His Experience of Chicago exhibit at the MCA through September. Check it out tonight during First Fridays. 6-10pm. The $15 ticket includes live entertainment and Wolfgang Puck hors d’oeuvres; cash bar. 220 E. Chicago Ave.

Head to Gold Star Bar for the 2008 release of the Not For Tourists Guide. Party includes free drinks and copies of the tome, but you gotta print out the invite here to get in. 6-9pm. Free.

Get the blues before you even get to the Blues Fest and check out Buddy Guy’s Legends—which is located close to Grant Park—for a special blues brunch. Munch on biscuits and gravy, scrambled eggs, sausage, bacon and muffins during acoustic blues sets by Guy King and Harmonica Hinds. 11am-1pm Saturday and Sunday. $15.

And you’ll wanna dress up and get down because it’s Big Brown going for the Triple Crown. Brownstone Tavern & Grill hosts a viewing party with a contest (for the best picks) that will include cool prizes like Guitar Hero III, gas cards (!!!), Cubs tickets, Sirius stereo players and an iPhone. Also, there will be prizes for best racetrack attire (think seersucker, bonnets and summer dresses), deejay between races and a live trumpeter for call to post. $5 drink deals include the Belmont Breeze (official drink of the Stakes), White Carnation (official flower of the Stakes) and a Maker’s Mark Mint Julep. Doors open at 11am; race starts at 4pm.
Served deliciously by 312 Dining Diva at 6:00 AM

There will be a Blues Brunch at the Jazz Record Mart (27 E. Illinois) this year, but it will be smaller than their usual blues fest brunch (both in terms of number of musicians and amount of food) but it's still a great option.

Doors open Sunday, June 8th at 9:30am, music begins around 10 and goes until noon. Performing will be Mississippi Heat featuring Inetta Visor.