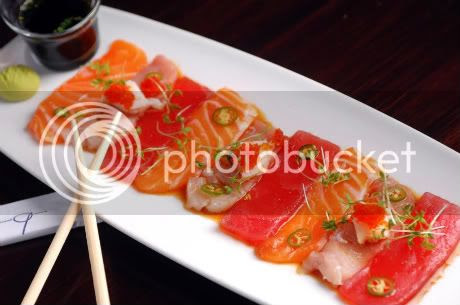 
When N9NE Steakhouse opened almost 10 years ago, the seats at its flashy, centerpiece caviar bar were the most coveted in the house.

But now the times have changed, and people have a completely different outlook when it comes to fine dining. They still want to do it, but they want it much more downscaled.

That's why it was a smart move on N9NE's part to recently transform the ostentatious caviar bar into the now understated Raw Bar. It hasn't lost its cache as the best seats in the house, as the area's still flashy as the see-and-be-scene section.

But now the focus is on the freshest preparations of seafood, where Executive Chef Michael Shrader personally oversees and interacts with guests as he shucks oysters and slices up sashimi. He'll even take special requests, serving up made-to-order items not listed on the menu.

Most items at the Raw Bar cost $3-$6, including oysters on the half shell (Kumomoto, Calif.; Malpec, Canada; Rappahanock, Va.), Ahi tuna, salmon and seabass sashimi, as well as shooters mixed with Bloody Mary mix, lemongrass, saki, ginger, hot chile, lime and cilantro. And for those wanting a little more, they'll whip up a creamy lobster salad ($16) or the octopus carpaccio for $13. The Raw Bar's only available on weekends.


Another good deal happening every day is the new Seven After Seven special at Petterino's, in the Loop.

Dine at the classic American eatery after 7pm for a three-course dinner for $19.95, plus a nice selection of wines by the glass for $7. Choices include classic tomato bisque, Yankee pot roast, classic beef Stroganoff, chicken pot pie and broiled salmon Wellington.

Valet parking is complimentary for those dining in after 7.
Served deliciously by 312 Dining Diva at 7:13 AM