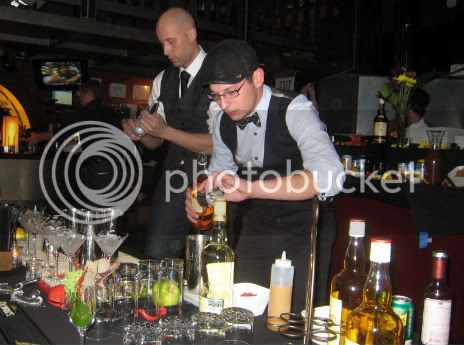 
It started in May.

The first-ever Sweet 16 of Mixology—created by Kevin Boehm (Boka, Landmark, Perennial)—had the city's most established bartenders competing against one another each week until it came down to two guys: Boka's Ben Schiller and Zach Friedlander of Relax Lounge.

The finals took place Wednesday at Landmark, with the contestants competing in an "Iron Chef"-style challenge for a grand prize of $500. The judges?! Yours truly, plus Chris LaMorte (Urban Daddy), Gary Wiviott (LTHForum, Low & Slow BBQ) and Amanda Puck (XA, The Experiential Agency). Our votes counted for 50 percent of the tabulation, while the audience's comprised of the rest.

Everyone at the party got to sample Friedlander's Autumnal Fire (made of Corzo anejo, Chrysanthemum honey liqueur, Yuzu sour, an egg white and garnished with sugar glazed and cinnamon dusted apple chips) and Schiller's Autumn Air (Bacardi eight-year rum, homemade heirloom apple, autumn spice liqueur, lime and bitters with a walnut emulsion). The judges also had to judge from two additional cocktails the bartenders had to create on the spot from ingredients that were only disclosed moments before in front of the audience.

It was a good thing this additional challenge happened because it turned out the popular vote was dead even at 88 to 88. And at least three out of four of the judges picked Schiller over Friedlander because he ran out of ingredients for his cocktail, which dramatically changed its overall taste.

But Friedlander's got a bright future as he'll be moving over to red-hot Gilt when it opens in January. He'll oversee the mixology program.

Schiller's keeping busy as well, as he'll be in charge of the drinks program at The Drunken Goat—the West Loop spot from Stephanie Izard, Kevin Boehm and Rob Katz.
Served deliciously by 312 Dining Diva at 2:15 PM