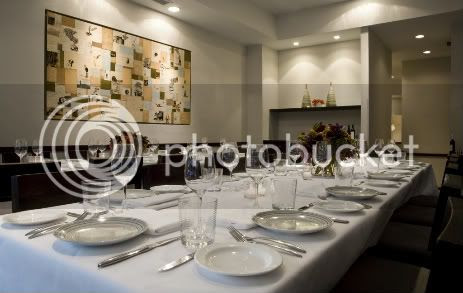 River North's Naha is one of several notable restaurants celebrating its 10th anniversary in 2010. (Photo: Naha)


A milestone in meals. An era of exotic entrees. A decade of decadent dishes.

Any way you look at it, in these tough economic times when people's tastes change at the drop of a fork, a restaurant surviving 10 years is quite a feat.

So let's take a moment to give props to 10 Chicago restaurants celebrating 10 years in 2010:

Adobo Grill: The moles. The margaritas. The music! The original location in Old Town still packs 'em in for lunch and dinner daily.

Bob San: The Wicker Park sushi spot has managed to hold its own even though its a stone's throw from one of the city's best, Mirai Sushi (which celebrates its 10th year this month!).

Chicago Firehouse: The former South Loop firehouse serves up decent classic American fare. Nothing fancy here, but we love it for the firehouse novelty alone.

The Grill on the Alley: The Chicago offshoot of the upscale Beverly Hills steakhouse is located on the first level of the Westin Hotel.

Joe's Seafood, Prime Steak & Stone Crab: A tourist favorite in River North, this just may be the best seafood spot in the city.

N9NE Steakhouse: The tony West Loop steakhouse chose to celebrate its milestone for its ninth anniversary, but we suspect they'll still have something in the works for 2010. The contemporary steakhouse continues to draw the business traveler despite the decline of the corporate card.

NoMI: Only one of two restos with an amazing view of the Mag Mile, the award-winning Asian-French inspired NoMI still has one of the best terraces in the city.

Ringo Japanese Restaurant: When it comes to sushi, this Lincoln Park standby gets it right. So right that they've repeated their formula of success in Tsuki and Ai.
Served deliciously by 312 Dining Diva at 8:00 AM