Hop Along To These Haute Cuisine Spots 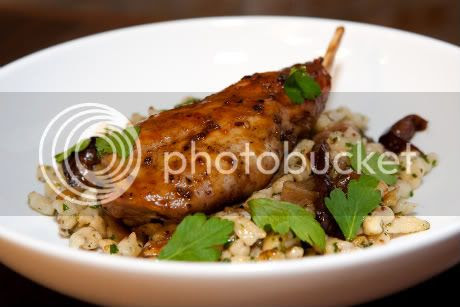 We've seen more rabbit-focused dishes this season than ever before, but could it be a coincidence?!

Beginning Feb. 3 is The Year of the Rabbit (signifying luck, tactfulness and thoughtfulness)—for the Chinese New Year—and there's a lot of yummy goings-on that may or may not have to do with the special occasion.

Sunda, the celebrity-infested resto in River North, is doing its annual homage to the Chinese New Year, but sadly there will be no rabbit on the menu.

From Jan. 31 to Feb. 6, they're doing a special, family-style menu that's $40 per person. Some of the featured dishes include hot and sour soup; a dim sum duet of shrimp or vegetable spring rolls and sticky rice; ruby prawns in a secret glaze; and beef short ribs in a black pepper sauce and accompanied by broccolini. Dessert is included in the meal.

Guests who make reservations at 7pm Feb. 3 will be entertained by live performances of the "dragon dance." It's to bring good fortune to all.

You can also celebrate The Year of the Rabbit by chowing down on these rabbit dishes elsewhere:

Bistrot Zinc: Through the end of the month, the cozy, Gold Coast French bistro is doing braised rabbit that's bathed in a sauce made from veal stock, white wine, onions, carrots, celery, garlic and thyme. It's served atop a bed of egg noodles and baby carrots.

Frontier: You'll have to wait until Feb. 10 to get a taste of chef Brian Jupiter's latest menu featuring many game dishes. Frontier's owned by the same team behind Lottie's and The Pony Inn, and we cannot wait for brunch. Jupiter's putting fried rabbit and waffles on the menu. Whaaaaaaaa.

Leopold: Now that the Belgian-inspired eatery in West Town has gotten its liquor license, it's going to be even harder to get in (they don't accept resevations). But it'll be worth the wait just for the smoked rabbit entree. It comes with mustard spaetzle, caramelized fennel, onions and duchesse prune glaze and pairs wells with a number of featured German and Belgian beers.