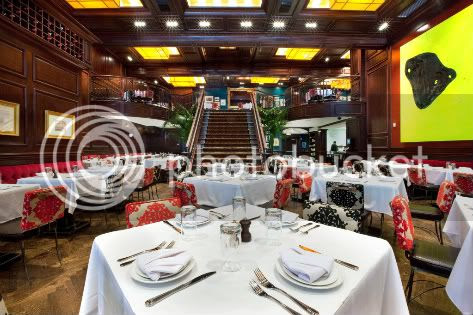 Chicago magazine dropped a bombshell Wednesday afternoon and didn't even realize it.

Well, apparently that is the exact address for 33 Club.

An Ultimate Insider tells 312DD that Tony Tomaska—who owns the building that houses 33 Club—is taking back his property because the current leasees have been behind in rent for months.

My source said: "(33 Club) owes huge back rent to Tomaska, who is an investor . . . they are still in court. But there is another concept making an offer too as soon as 33 Club closes."

UPDATE: Jerry Kleiner, who was a partner from the beginning, is already out at 33 Club.

ANOTHER UPDATE: The publicist from 33 Club emailed this: "Wanted to update you that we have confirmed with ALL owners that 33 Club is definitely staying open. The address of Tony Tomaska's Mama Milano is the same as 33 Club, Nicole Miller, Bank of America et al."

YET ANOTHER UPDATE: I spoke with Tomaska this afternoon, and he said he is "100 percent behind 33 Club" and has no plans of closing it to make way for another concept. My Ultimate Insider, however, insists that the partners of 33 Club are ready to throw in the towel by the end of spring.

This is definitely shaping up to be an interesting story, and I will keep you posted on what happens . . .
Served deliciously by 312 Dining Diva at 6:15 PM

What is Kleiner doing these days? Seems all we hear about is what he's out of or what's closed down.

There is talk that he is going to move to LA and partner with folks out there. He actually told me this himself in February.

BEFORE YOU REPORT OR GUESS AT SOMETHING YOU SHOULD TAKE THE TIME TO VERIFY YOUR INFORMATION. 1419 N. WELLS IS THE ADDRESS FOR MULTIPLE BUSINESSES, NOT JUST 33 CLUB. THERE IS A TINY AND I MEAN TINY STORE NEXT DOOR THAT THE TOMASKA'S ARE OPENING, AND AS FAR AS LEGAL BATTLES, THE COURT DECIDES WHATS WHAT!!! NOT THE TOMASKA'S, AND CERTAINLY NOT YOU. YOU HAVE A REPUTATION FOR "NOT" DOING RESEARCH BEFORE YOU SPOUT OFF...33 CLUB IS STILL OPEN AND INTENDS TO STAY OPEN!!! IT IS ARTICLES LIKE YOURS THAT DOOMS RESTAURANTS THAT ARE TRYING TO MAKE IT THROUGH THESE TRYING TIMES. DO YOUR HOMEWORK!

@Anonymous: What are you talking about?!

I do my research, and everything I have written about 33 Club has been true, from the first executive chef leaving to what is happening now. You have no idea WHO my source is. I'm allowing your comment to go through because your comments make absolutely no sense.

I don't "doom" restaurants. I WANT them to thrive, but when they're not paying their bills what do they expect. I'm just posting the verified information I get.

Also, and THIS is related:

I knew at the beginning of January that Gioco and Red Light were serving liquor even though they had lost their licenses. I called them and they emphatically denied it.

I understand that restaurants have problems and have to cover their asses when issues come up, however, I have to do my job and report on facts that are public record.