One Guy Really Loves That Chicken . . . 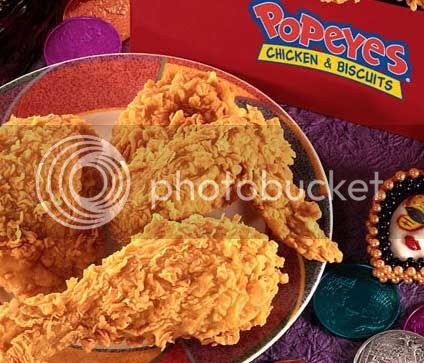 You may remember Daniel Kibblesmith as the quirky and nerdy Chicago bachelor from Groupon featured recently on an episode of Bravo's Millionaire Matchmaker.

His latest stunt makes me wonder if he is indeed a bonified millionaire because if he is, why is he writing an open letter to Popeye's Chicken & Biscuits to sponsor his birthday party on Sunday?!

Here's what he wrote, in a nutshell:

"My loft-style apartment in the Wicker Park neighborhood of Chicago accommodates roughly 100 guests, with room for buffet style dining, and the nearest Popeye's location is a short drive away at the intersection of Damen and Fullerton. I propose a series of sponsored Tweets, not unlike partnerships other franchises have established with Chicago-based comedians . . .

"In addition to this, my Birthday celebration would be documented by a professional film crew, shooting simultaneously on 3 Canon T2i’s with onboard shotgun microphones. Effusive, honest and unscripted testimonials will be given about our love of Popeyes chicken. We’re in a position to handle all editing, graphics and post-production, and would love to even have Popeyes marketing representatives and franchise employees in attendance."

This is quite hilarious, and it'll be interesting to see if Popeye's bites.

Read the letter in its entirety right here.
Served deliciously by 312 Dining Diva at 9:41 PM

Wow this is amazing to me. I totally remember him from MM. This is so bizarre lol! I wonder if they'll take him up on the offer.

If Popeye's agree to this, I guarantee there will be copycats. . .

Ok can I get Opart on state to cater my bday bash? I'll have 5 cellphone cameras and a handheld recorder.... come on!!