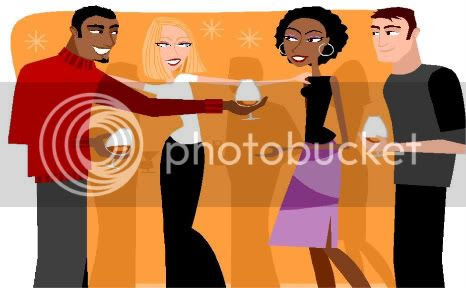 . . . before Valentine's Day rolls around, so are you all set with a date?!

If so, then great for you, but if not 312DD can point you in the right direction.

One of the weekend's coolest events is Paint-n-Palate, going down at Avram Eisen Gallery (5202 N. Damen Ave.).

It's a wine-tasting party where the main attraction is visual artist Nathan Jalani Taylor, who will paint a series of works on the spot. It should make for interesting conversation as guests attempt to re-create his work as they're all given paintbrushes, blank canvases and easels. Thank god he'll be walking around giving instruction so you don't look too bad in front of the others.

I typically don't plug "speed dating" sets, but the fact that this one offers you a glass of wine to loosen you up could make for some fun times as you plunder among the participants (26-40 only). It's happening at Salute, in the Gold Coast, and it's free! Appetizers are also comped, but just make sure you're carrying a tin of Altoids. There's also a "secret admirer message exchange game." Hmmmmm. 6-7:30pm.

For 'sho there will be a bunch of guys circling SmallBar Wicker Park as they tap a firkin of Bells' HOPSLAM! Cask Ale Jam, which is supposed to be a rare sighting in Chicago. All unattached women in the area should be there. Yes. 8-11pm. No cover, but they're charging $7 for a 10oz snifter til it's gone.

Tonight's No Bull Thursday at Bull & Bear will be a full-on benefit for UNICEF's Haiti Disaster Relief Fund. We have to give props to Outfit Chicago for hosting, as they've arranged for half of the proceeds from 3-6pm (when you order appetizers) to go to this worthy organization. Additionally, a $20 donation 6-8pm will also benefit and guests will get comped apps and drinks. A good mix of men and women. The party continues until 1:30am.

The First Fridays that started it all in the early 1990s happens this time at Crimson Lounge. Get there right after work for half-price admission, and stay for the dance party. That means that you'll need to wear something extra cute to work. 6-11pm. Cover varies.

For those not looking to club it up on a Saturday night, here's your best alternative in River North. Epic's massive first-floor lounge is the latest to collect a fashionable crowd of singles on the prowl. The best things: No bottle service and first-come seating. Deejay starts spinning downtempo tunes at 9pm and the mingling goes on until 2am. No cover.

Surprised these guys never did this before. 20/30 Club—composed of mostly single professional men in their 20s, 30s and ahem, 40s—throws a Super Bowl party where $10 of the admission price goes to a local charity. You'll get endless food (corn dogs, sliders, hot wings) and an open bar for $35. What's really cool is that if you're not drinking it's only $10. Party happens in Lakeview at Rockwood Place. 5-11pm.

Expect to call in sick Monday if you plan to go to LaSalle Power Co.'s Super Bowl bash. They'll have drink deals like $4 domestic bottles, $5 bomb shots and $15 mix-and-match buckets (five bottles each, includes domestic and imported). For an extra $15, you can chow down from the buffet (Angus beef sliders, turkey sliders, sloppy Joes, tater tots, boneless chicken strips) until the party ends. LaSalle will show the game on a 167-inch plasma video wall and 10 50-inch flat-screen TVs. 4pm-2am.
Served deliciously by 312 Dining Diva at 7:30 AM