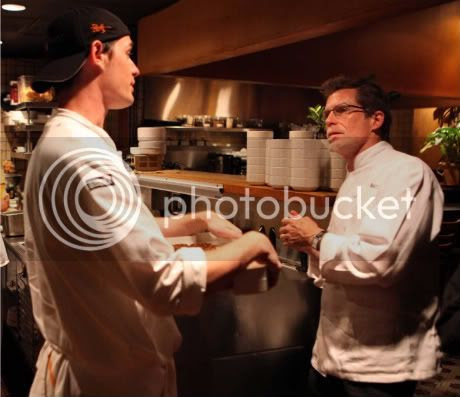 The time has come for Topolobampo Chef de Cuisine Brian Enyart to fly the coop.

Apparently, he's been with Rick Bayless' well-oiled empire for 14 years—his entire culinary career thus far—and he wants to see what else is out there.

The Chicago Tribune reported in January that Enyart was leaving, and Thursday was the big day.

He wrote a heartfelt message on his Facebook page Thursday afternoon:

"Today marks the end of my 14 years with Frontera (Grill) and Topolobampo. Thank you friends, family and coworkers for making this the most profound experience I've ever known. Good luck and congratulations to everyone. Push on." He didn't give any indication of his next move.

I reached out to several of his culinary colleagues for well wishes, and man, they were more than enthusiastic.

Avenues' Curtis Duffy was more than excited because he was dining at Topolobampo on Enyart's last night.

He said: "Brian is an amazingly talented chef. I am ecstatic for his next move. Chicago is lucky to have his brilliance!"

Andrew Brochu, of Kith & Kin, offered similar sentiments: "Brian is an amazing talent and I cannot wait to see what he has up his sleeve for his next venture."

The admiration also flowed from Boka Restaurant Group partner Kevin Boehm: "He's an amazing talent. Excited to see where he is going to go next."

Jimmy Bannos (Heaven on Seven, Purple Pig, Dough Boys) sorted hinted at a possible collaboration: "Good luck! And if he needs any help, he can call me."

Supreme Lobster super fishmonger Carl Galvan pretty much gave him a high five via the Internet: "The dude deserves some props. He helped build Chicago's restaurant scene to what it is today."

And leave it to jokester Ryan Poli (Tavernita) to start a rumor: "Congrats, man! I look forward to Enyart's taco truck hitting the street soon!"

Yeah! Let me add to the cheers. Congrats, and good luck, Brian!
Served deliciously by 312 Dining Diva at 8:15 PM