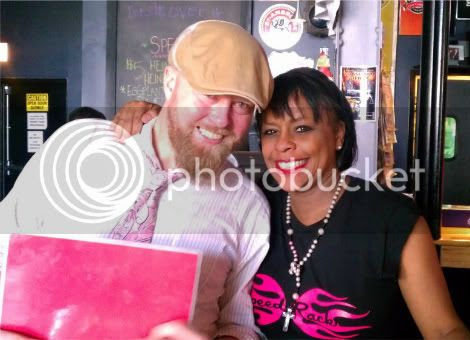 Lynn House, the mega-talented mixologist at Blackbird, has taken the cocktail program to new heights since coming aboard in 2010.

And as she celebrates her second anniversary in May, she has some exciting projects on the horizon.

When chef/owner Paul Kahan hits up New York to find out if he'll snag a James Beard award for Outstanding Chef, House will also be there working with him at the annual gala. As Kahan cooks at one table, House will be slinging her signature Celluloid Breeze—the one she created for the Sundance Channel's Beyond the Bar Series. Assisting her will be Blackbird owners Donnie Madia, Rick Diarmat and Eduard Seitan.

"A little over a week ago, Paul had a chat with me about an experience he had while in Nashville. His 'bartendress' had crafted some wonderful after dinner libations, and it got him thinking that including after dinner 'tails would be a wonderful addition to the current cocktail program," House told 312DD exclusively. "I have been tinkering in my home bar for the past week, and have created five dessert libations. The goal was to make them clean, balanced, seasonal, unique and complementary to our phenomenal desserts, created by Bryce Caron."

Peep House's dessert cocktail menu below, with her tasting notes:

House-made Citrus Cello (This will vary throughout the spring and summer season. The first batch is a juniper/lemon/lime cello, which has been mellowing for 10 months.)

Sakura (It means cherry blossom in Japanese, and is the crisp and dry selection of the menu. It features Mizbasho Sparkling Sake, Roi Rene Rouge cherry liqueur and Fee Brothers Cherry Bitters.)

Oh Lollie Pop (If you were to take a Tootsie Roll Pop and a Root Beer Dum Dum, and add liqueur...this would be the drink. It features Fair Coffee Liqueur [the only certified fair trade spirit company in the world], Pierre Ferrand Dry Curacao [just released with David Wondrich as a consultant; and highly acclaimed by the New York Times], root liqueur and lemon oil.)

Dreaming of Alexander (This is intended to be a fixture on the menu with flavor changing as the season progresses. This will also be one of my feature cocktails at my Tales of the Cocktail 2012 Spirit Dinner. The base formula of the cocktail is the same, seasonal puree, gin and scented cream. For the first menu, the flavors will be as follows: Plymouth Gin, rhubarb/strawberry puree [Rhubarb is currently being harvested from my garden], fresh lime and a Pernod Absinthe-scented cream. The cocktail as I describe it is a cross between a Dreamsicle and an Alexander [classic cocktail with gin, creme de cacao and cream]).