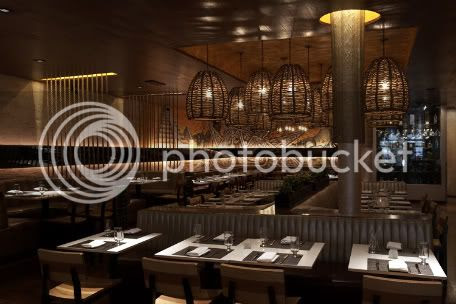 
Chicago Tribune critic Phil Vettel dropped by Mercadito one Saturday night and had to wait for a table for a mighty looooong time even though he had a reso:

"I arrived on a Saturday night, and my heart sank almost immediately. There were people clustered by the host stand, three-deep at the bar and taking up every available bit of floor space (and some not-so-available spaces). My prospects for immediate seating seemed poor.

So we waited. And waited. Every 15 minutes or so, we'd check back in for another 'just a few minutes' update. The hostess even tried the 'I was just looking for you' ploy (she had done no such thing). She assured us that the first round of drinks would be free, and later upgraded that offer by saying there'd be some free guacamole. A manager, or someone acting like one, apologized for the delay and said that when it came time for the check, he'd stop by the table with an adjustment that would, in his words, 'make you happy.'

When check-time came, our waiter comped a round of drinks, but the additional adjustments never materialized. Not that that matters much to me, because the Tribune reimburses me for my meals. But it was another promise unkept.

We did get seated, about 65 minutes after our reservation (tip o' the hat to the anonymous tout by the host stand), and things improved slightly."

The cost of Mercadito's growing pains?! They earned only one star from Vettel.
Served deliciously by 312 Dining Diva at 9:54 AM