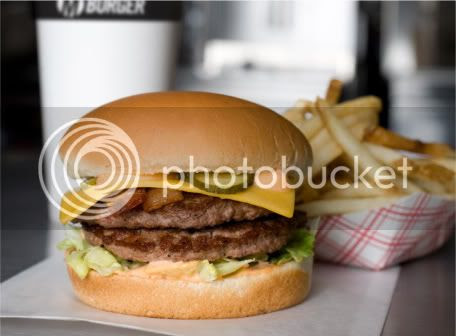 
312DD finally got to actually taste the burger we've been braying about since we were the first to deliver you the scoop back in the fall.

That'll be M Burger, the casual sandwich shop adjacent to its four-star sister TRU, which opens to the public Thursday. It's owned by Lettuce Entertain You Enterprises, and partner Scott Barton told us that the "M" pays homage to the Mag Mile.

They were open Monday for a select few during lunch rush, offering folks who work in the area first shot for the test drive. The full menu was available, but I was highly encouraged to order a few items that will only be on a "secret menu." You'll need to put on your list to remember the Hurt Burger (a spicy sandwich with BBQ sauce, Pepper Jack cheese and jalapeños) and the ultra-creamy Caramel Shake.

The rest of the menu is pretty standard fare, most notably the signature M Burger (drizzled with a tangy secret sauce and bits of bacon), Nurse Betty (veggie sandwich named after a popular Northwestern Memorial Hospital nurse) and fried chicken sandwich. The most expensive burgers on the menu were the Hurt and M—when you ordered it double stacked at $4.79.

M Burger's tiny, with only a few counter seats on the wall and a few more with a good view of the famous TRU kitchen. That's why it'll be a big relief when it gets warmer, as they'll have 40 sidewalk seats.

Two big events are coming up that should excite folks: When the iPad launches at the Michigan Avenue Apple Store at 11am April 3, look for M Burger to extend its hours to midnight the previous night to take advantage of the expected crowds (regular hours will be 11am-7pm).

And look for them to also offer a special minty chocolate Leprechaun Shake on St. Patrick's Day only. Hopefully it'll taste a helluva lot better than that whipped cream Shamrock Shake nonsense McDonald's is trying to pass off to us this year!
Served deliciously by 312 Dining Diva at 1:16 PM