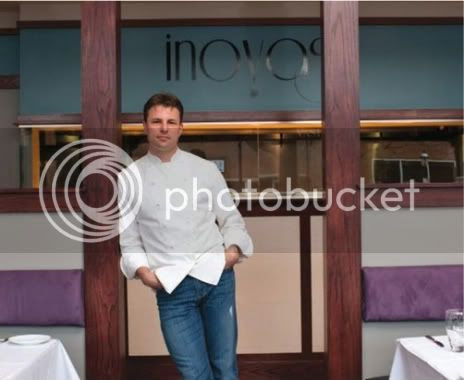 His Lake Bluff resto, which celebrates two years in June, packs in a well-heeled, food-loving crowd several nights a week, but he's hungry for recognition from city folk.

His blog, The Thought, is usually pretty controversial, taking on such issues as molecular gastronomy and the antics of fellow colleagues such as Graham Elliot.

But this time, des Rosiers chose to take a more subtle approach as he basically wrote an open letter to media:

"To the powers at Food & Wine, James Beard, Saveur, Michelin, The Eater 38, CS, and even the brand new Travel & Leisure: you’re missing it, or at least part of it. You are ignoring one of the best restaurants in Chicago that’s not actually in Chicago. And here’s why:

"No one does the level of our encompassing experience at our price, not even close. We don’t have communal tables, we do have actual linen (3 layers to be exact), constant approach of local and sustainable farms, in house made liquors (12 different types and styles as of now), small production family owned wine list at an actually normal markup (2 times for most things), glasses of wine less than $10 (more than half of our 20 pours), La Colombe coffees and a Synesso espresso machine (first in Chicago and the country for the machine), Rare Tea Cellars teas (for almost 2 years now), our brand new style of menu organized by inspiration and designed to engage customers and increase the level of relationship between a chef and his guests."

Pretty sure all of those media outlets found a little restaurant in Evanston years ago named Trio.

This guys complaining, begging for love from the city has gotten pretty old. Either deal with the customers you have or suck it up and get into the city if you're looking for a spotlight.

Media/Press/Customers will find a place if it's in the middle of nowhere, maybe Inovasi isn't everything he thinks it is.

Does begging for attention ever really work when you're no longer a kid? I don't think it gets the kind of respect that you want.

Anonymous said...
John;
Though you make some good points, you might have to think about a couple of things. Just where is the cut off to being considered a Chicago restaurant? Lake Bluff? Rockford? Milwaukee? I am sure it is frustrating not being able to get accolades, but if that is what you want (and it seems you do) Move your operation to the city. The comment about how you "don't give a shit" about how people get there... well you obviously do... hence the plea to come to lake bluff in this blog. With hundreds of great places to eat in city proper and gas prices 4.50 a gallon... well figure it out.