What Is Going On Over At Graham Elliot's?! 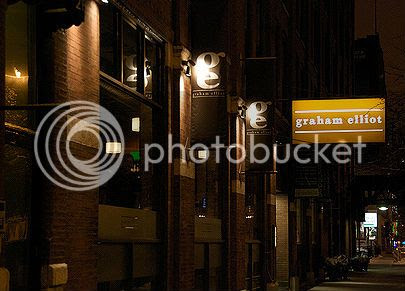 Just last month, Phil Vettel awarded Graham Elliot three stars in a Chicago Tribune review, so what's up with the turmoil behind the scenes?!

An Ultimate Insider tells 312DD that on Sunday afternoon some pretty intense disagreements between front of house and back of house had a few staffers walking out before service. They were so heated, in fact, that top management was called in to get matters back under control.

The River North restaurant is closed on Mondays and Tuesdays, so hopefully everyone will have a chance to cool off before it reopens Wednesday . . .

SECOND UPDATE: Executive Chef Andrew Brochu is no longer at the restaurant.

Is Michael Simon going to be back as Sheriff ?

Re: Michael Simon... GE should be so lucky!

Gee, Mr Simon seemed quite happy at Carriage House this last Saturday. Then again, so did Drew when I saw him at BOKA the prior Monday?
Ahhh... what a tangled web...