What Has Laurent Gras Been Up To?! 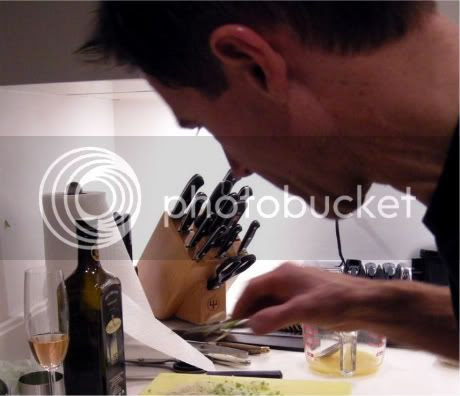 What has former L2O executive chef/partner Laurent Gras been up to since leaving Chicago in November?

He's been cooking a lot at home in New York, according to his blog, as he works on opening another restaurant.

It appears that he misses being in a professional kitchen but at the same time he's relishing in the solitude:

"Cooking at home, for a chef really has an advantage: you get to eat everything you cook. But the disadvantage is you don't have a team around you to put everything together and do the dishes. I enjoy the process of cooking at home. Usually a glass of champagne comes in the middle and that make it even more enjoyable. I usually buy a small list of ingredients the day ahead to avoid going to the store three times in the same hour.

At dinner the other night, I was responsible for the first course. Suddenly the pressure of the service came right back to me. I thought to myself, I am going to do a ceviche so I don't go into a war with the pots and pans.

In the afternoon I picked up a live lobster, a fillet of stripped bass and a few garnishes. I poached the lobster slowly, cooled it down in water, removed the shell and sliced it finely. The stripped bass had a bright red blood line and a translucent flesh, so those were good signs of freshness. I removed the skin, then sliced the fish into fine strips. The garnishes were a combination of sliced torpedo shallot, diced ginger and jalapeno. The juice for the ceviche was a combination of meyer lemon, lime, orange, garlic, ginger and chili.

All the plates were assembled in stages, one by one to keep them cold until they hit the table. The rest of the meal was a little bit like when I'm doing a dinner with other chefs. I help out on the other courses, but no more pressure. Maybe because the wine pairing were excellent that night."
Served deliciously by 312 Dining Diva at 10:25 AM